When I first started getting serious about running again last spring, I used the RunKeeper app on my iPhone and, coupled with the app running on my Pebble smartwatch, was really liking it.  The Pebble app allowed for basic start/stop functionality and stat display.  Then, two things happened.  First, I discovered Strava, a really cool running site that also offered their own iPhone app.  More importantly though…it got cold!  Living in Colorado, ‘nice’ weather for running this time of year is temperatures in the teens and sunshine.  My limit is about 5 degrees…though that’s pushing it, it’s harder to breathe at that temperature.  Most importantly, I’ve found that my iPhone’s battery just doesn’t last when it’s cold and also having to keep the GPS active…it wasn’t able to track my long runs (>5 miles). 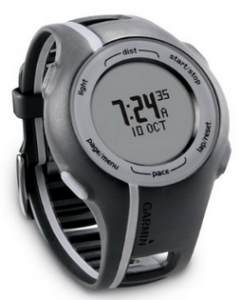 Fortunately, the solution is pretty great!  I picked up an inexpensive Garmin Forerunner 110 GPS-enabled sport watch (pictured here; $120 at Amazon).  As far as sport watches go, it’s really basic, a true entry level model.  However, I’ve found it perfect for my needs.  The battery life is great (more on that later), it does a good job of tracking my runs and providing realtime stats.  Synchronizing with the Strava website is easy after my runs via a USB cable.  The only catch has been that battery life…it should last a long time in standby mode (3 weeks per Garmin), but I’ve found that if I don’t leave it plugged in to my computer to keep the battery top off, the actual battery level is a bit unpredictable when I head out for a run (it was out of juice one time after sitting less than a week).  Minor inconvenience really but something to watch out for if you get one of these…just keep it plugged in to your computer when not in use and you’ll be fine.  Battery life is supposed to be around 8 hours in active use, but my longest runs so far have been around 2.5 hours so I haven’t really pushed it.  The best part is, since this is in constant contact with my skin, I expect the air temperature won’t have nearly as much impact on battery life as it did with my iPhone.