There’s some good news in the fight against ever-evolving bacteria and the resistance they’re building to common antibiotics (the ‘post-antibiotic era‘ we’re entering).  Researchers at the University of Notre Dame have discovered a new class of antibiotics (called oxadiazoles) that is proving effective against MRSA.  Of course, who knows how long it’ll take for MRSA to adapt and develop resistance…but for now, it’s great news.

The ILIAD Project is launching what they describe as the first “Massively Multi-Scientist Open Experiment (MMOW)”, whereby participants will perform experiments at home in an attempt to help identify new antibiotics.  This comes at a time when the world is entering a ‘post anti-biotic era’, where bacteria are evolving resistance to antibiotics faster than we can invent new ones (read this post for more on that).

You can support the ILIAD Project on Indiegogo; they have a ways to go yet to reach their funding goal so please consider helping them out!  Most antibiotics to date have been accidental or lucky discoveries…a project like this has a lot of potential!

Use humans have had it good since penicillin was first discovered in 1928.  It, and the many other antibiotics that followed, provided us with a defense against bacteria infections which previously posed serious, sometimes fatal threats to our health.  Antibiotics also enabled new forms of treatment that would incredibly weaken our immune systems and otherwise leave us vulnerable to even the mildest infections.  Things like chemotheraphy, organ transplants, bone marrow transplants, for example.

The problem is evolution.  Bacteria have been adapting to our antibiotics faster than we’ve been able to invent new ones.  It’s hard to say exactly when we lost that battle…but there’s little doubt that we’re now in an era where we can not depend on antibiotics like we used to.  This is not to say that all infections will be fatal…but they’ll be much more serious than in the past.  PBS Frontline has a great article and TV spot talking about this (follow this link) and it’s definitely worth checking out.

High use of antibiotics in factory farms is not helping things…though they’re not the only culprit.  Antibiotics are ‘over prescribed’, given out like candy instead of held back for only serious cases.  In any case though, more cautious use of antibiotics is really only going to slow the evolution and just delay the inevitable.

So where do we go from here?  The antibiotic market has not been a very profitable one, historically, at least compared to the other pharmaceutical options.  If that changes, it might attract more R&D dollars which may lead to new antibiotic discoveries…but that’s wishful thinking.  The ‘last line of defense’ antibiotics are already very expensive…and as the problem grows worse, the number of patients willing to pay for a new option will sadly increase.  Developing a new antibiotic is just not something that can be expected to happen quickly…and the big unknown is how long it will be effective, before it too becomes ineffective against an ever-evolving threat.

It’s a long article over at PBS…but something that we should all read, this is a big change coming to our society and the only way we can expect to counter it is if people are informed and act. 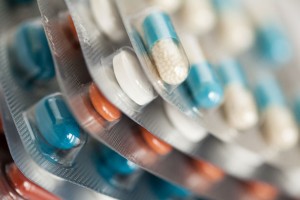 According to this article at Treehugger, antibiotic-resistant bacteria (such as MRSA and CRE) are responsible for more deaths each year than AIDS, in the US at least.   It’s a problem that is only expected to get worse in the coming years.  Not helping matters is the large extent to which antibiotics are used in animal agriculture – it’s estimated that around 80% of antibiotic use (in the US) is for that.  The more we use antibiotics, the faster bacteria will evolve to resist them…there’s no escaping that fundamental fact of evolution.

Government officials at the CDC have recently warned against the emerging threat posed by these ‘superbugs’ as well.  It’s not clear there’s any solution in sight though.  We can slow the spread of these by better sanitation and reduced use of antibiotics, but it’ll continue to be a growing problem for future generations to deal with. 🙁

Yesterday I wrote about the dangerous of evolving antibiotic resistant bacteria.  I’m convinced that globally, we won’t be able to decrease the usage of antibiotics enough to prevent the evolution of those bacteria, so instead we need to focus on technologies to fight them.  One cool one is a new metal alloy, that adds silver, nitrogen, and carbon to the surface of a stainless steel alloy.  The result is metal that helps prevent the spread of any bacteria (well, until they become resistant to that…!).  Read more here.

A similar approach uses a special coating (paint-like), applied to any surface, that kills MRSA bacteria.  It uses a special enzyme to directly target MRSA.  The applications are probably pretty limited for now, but it illustrates one way that technology will likely be used in the future to combat this problem.