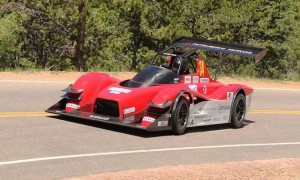 Gasoline powered cars still dominate the Pikes Peak International Hillclimb, but electric cars are showing big improvement and may be challenging fossil fuel cars in the near future.  The Mitsubishi shown here cut 38 seconds off of last year’s electric car time, and was only a few seconds behind the overall winner’s time (but almost a minute slower than the course record set last year by Sebastian Loeb).  Will 2015 be the year that an electric race car beats a gasoline one?  I can’t wait to find out!

Also in electric car racing news, Formula E has its first race in September of 2014!  Another milestone in automotive history as those battery-powered race cars take to the track for a one hour race.

Tesla made a pretty odd announcement today…Elon Musk announced that, “Tesla will not initiate patent lawsuits against anyone who, in good faith, wants to use our technology.”  This essentially opens the door to competitors wishing to copy them.  In his blog post, he goes on to say that the market is ‘enormous’ and that their true competition is gasoline cars.  It’s a pretty cool marketing gimmick…make that a REALLY cool gimmick…they’re getting publicity and helping to build a brand image, while recognizing the futility of pursuing patent legislation against other large companies (case in point: Apple and Samsung’s never-ending feud).  Nice move.
June 12, 2014

I’m a bit surprised at this…electric race cars are about to become a reality, with the Formula-E race series hitting its 10-team target and scheduled to start racing in the fall of 2014.  Motor output will be limited to 180hp (keep in mind electric cars are more about torque than horsepower), and will be allowed short-term power boosts like F1’s ‘push to pass’ feature.

Check out the video below…the cars sound pretty strange…I’m not sure I could get used to that, it’s just not the same.  Though I have no doubt the racing may be great!

For a long time, people have talked about the concept of roadways that can provide electricity to the cars, trucks and busses running above.  While a cool idea, I always thought the economics of this didn’t make sense and it wouldn’t be implemented in our lifetimes.  At least on a small scale, I’m proven wrong.  South Korea has equipped fifteen miles of city streets with just such a system – underground cables that charge EVs that are either parked or driving above.  It’s cool to see this technology progress…but I still question whether it’ll be widely adopted this century.  It requires massive public infrastructure investment and commitment to this transportation technology.  In the US at least, those are two things that we are so incredibly far from, at least politically.  Maybe some other country can pull it off.  I can see this working out well with only major roads having this charging capability…the EVs would still use a small battery to power them on trips off those main arteries.