Cool news…using batteries from the gigafactory Tesla is building outside of Reno, Solar City will be including battery backup systems in 100% of the rooftop solar systems they install within 5-10 years.  This is significant partly because it helps illustrate the rapidly decreasing costs of both solar panels and battery backup systems, but also because it is likely to have a major impact on our current energy production and distribution systems…the old grid will become obsolete eventually, but the transition won’t be easy for the larger energy companies.  Read more at climaterocks.com.

Tesla made a pretty odd announcement today…Elon Musk announced that, “Tesla will not initiate patent lawsuits against anyone who, in good faith, wants to use our technology.”  This essentially opens the door to competitors wishing to copy them.  In his blog post, he goes on to say that the market is ‘enormous’ and that their true competition is gasoline cars.  It’s a pretty cool marketing gimmick…make that a REALLY cool gimmick…they’re getting publicity and helping to build a brand image, while recognizing the futility of pursuing patent legislation against other large companies (case in point: Apple and Samsung’s never-ending feud).  Nice move.
June 12, 2014 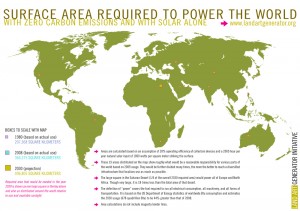 Solar panels take space, but just how much land area would need to be covered with solar panels to provide 100% of this planet’s power needs (including transportation)?  The answer is pretty surprising, as the image here shows (click on it for a larger version).  It helps show just how much energy the sun is sending our way, and what a small percentage of that is actually required to power our civilization.

There’s still a matter of energy storage with solar panels, but I wonder, if long range transmission efficiency could be boosted to the point where we have a global power grid?  The sun is always shining on about half the planet…if that power could be transmitted to the dark side of the planet, there would be no need to store electricity.  Nikola Tesla suggested that just such a system could be possible.  The drawbacks are obvious though…it would be difficult or even impossible to employ Tesla’s system in a way that would allow companies to control who uses that energy.  The business model falls apart, sadly, and we live in a world controlled by business and profit.

The New York Times has been caught lying in a recent review of the Tesla Model S, outed by Tesla CEO Elon Musk (Musk was quite diplomatic about this and just laid out the facts, never accusing the Times of outright lying, but I’m not diplomatic and I call it as I see it).  Even before Mush presented this evidence, he tweeted about the test to which the reporter replied, “It happened just the way I described it” (link).

So, who do you believe?  The reporter, John Broder, is no fan of electric cars and an earlier article indicates a clear bias.  The thing is, after the TV entertainment show Top Gear created a misleading and negative review of the Tesla Roadster, Tesla Motors got smart and started equipping press cars with, well, let’s just call it the ‘Special Reviewer Option Pack A’, or to describe it briefly, data logging to capture information about the car throughout the review.  It’s that information that Musk is using to contradict Broder’s story.  He never fully charged the car, and even left his final charging station when the car was saying it could only go half the distance he planned.  Even then, the car exceeded that estimated range before it finally ran out of juice (well done, Model S!).

The data is difficult to ignore, and Elon Musk’s blog post will probably lead to John Broder’s firing (or if it doesn’t, I’ll lose all respect for the New York Times).  But this focus on the data got me thinking…what if the data could be falsified?  I do not believe that was done so, I fully believe in Tesla’s data…but as a society, we’re placing more and more reliance in data, in pictures, in videos…all of which can be falsified.  We’re entering a new world where to defend yourself, your word alone will not be enough…you’ll need your own set of data to back up your claims.  This is where wearable computing may come in…imagine a personal datalogger that just works in the background, until those times you need it.  You wouldn’t need to capture all the data your accusers did…just enough data to cast doubt on that evidence.

It used to be one person’s word against the other’s in court…and to win, you attack the credibility of the other witness.  There’s a new witness in court…it’s data.  Better have your own to defend you.

UPDATE – one of the New York Times editors has posted a reply here, basically saying that there were “Problems With Precision and Judgment, but Not Integrity, in Tesla Test.”  A fair look into the issue…it helps restore my confidence in that newspaper.