The fight has begun.  Solar and ‘old energy’ are increasingly butting heads, as the old business model breaks in the face of new distributed solar generation.  Old energy is fighting back with the help of governments reducing incentives for distributed solar installations and even increasing fees for grid-tied systems.  It seems to be slowing down solar adaption in areas, but I think this is just a temporary blip…once energy storage drops in price, people will have a viable solution for going entirely off-grid, and then Old Energy will be faced with the same infrastructure costs, yet with fewer customers to spread that cost over.  The inevitable collapse of Old Energy will be fascinating to observe…I can’t wait!  Read more at  Business Insider.

Solar electricity is moving ever closer to grid parity, meaning the cost is comparable to existing grid supplies (coal, gas, etc).  This is a pretty significant milestone, as politics have failed (and will continue to do so) in substantially reducing CO2 emissions…but if solar becomes less expensive than fossil fuel electricity, market forces will take over where governments have failed.  A project in Spain recently achieved grid parity with a group of fourteen rooftop solar panel arrays, and in the US, a project by First Solar is producing at less cost than coal.  I think we’re moving into a new electricity marketplace, where people are going to start asking why we’re not looking at solar to cut costs, rather than asking why we should pay *more* for solar, as has been the case in past years.  I wouldn’t expect your utility bill to decrease though, as the gradual decommissioning of fossil fuel plants is not going to be cheap.  But, a big win for the environment – if we can move quickly enough on this.

Also in solar energy news, the world’s largest solar thermal plant, being built in California, recently passed a big test proving that it’s ready to enter commercial service.  Solar thermal technology is significant as the thermal energy it collects can be stored to provide energy when there’s a shortage of sunlight (cloudy days, or at night). 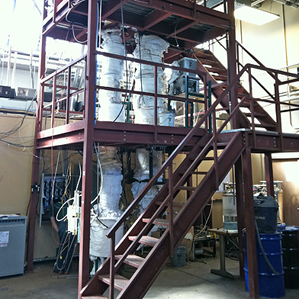 The idea of ‘clean’ coal power has really been more of a marketing ploy and not something that environmentalists would agree with…until now, that is.  Researchers at Ohio State University have proven a new clean coal technology in a 25kW facility ran for one week…far from the megawatt scale needed for industrial uses but no small feat and a great step towards that goal.  The next step is a one megawatt demonstration plant already in the planning stages.

So how does it work?  Burning coal is a messy process, producing lots of gaseous byproducts that are difficult to separate and manage.  This new process (“chemical looping”) reacts with materials rich in oxygen, like iron oxide (ie, rust).  The energy in the coal breaks the bond between the oxygen and iron, which produces nearly pure CO2 as a byproduct (the other being iron metal and a mineral known as wustite).  So, it still produces the greenhouse gas CO2, but that CO2 is nearly pure, meaning it’s much easier to contain it (at which point it can be used for industrial purposes or stored underground to not contribute to global warming).  The pure iron is then burned in a separate process, which produces heat to generate steam and drive turbines to generate electricity.

This is expected to result in only small increases in the cost of electricity…whether it can be scaled up to power plant levels quickly enough is the real question.

Coal has long been considered ‘cheap electricity’…nothing could really compete with it, cost-wise.  While that still may be the case, we’re really, really close to the point of ‘peak coal’, where supply cannot meet demand.  More specifically though, it’s a problem of ‘cheap’ supply.  There’s still a lot of coal out there, but it’s far away from the population centers that need it.  It’s gotten bad enough that the idea of shipping coal from the US to China is even being taken seriously.  That transportation cost adds to the cost of the coal, so much so that in some places, like India, investments strategies are shifting from coal to wind and solar energy projects.  Transportation costs, fueled by oil, will only rise as we near Peak Oil as well.  The US will have no choice but to follow this shift away from coal, the question is, though I fear that shift will happen too late to prevent significant global warming.

Bad news for our atmosphere…at a time when we should be reducing carbon emissions, consumption of the most CO2-laden fossil fuel, coal, is increasing, up by 5.4% over last year.  Renewable energy solutions continue to make progress, but it’s a drop in bucket and doesn’t even offset these increases in fossil fuel usage.

While I continue to believe that we have developed the technology to afford-ably implement the type of massive change that’s needed to maintain atmospheric balance, it’s quite clear that we lack the social and political willpower to do so.  What a shame.

Read more about coal usage over at Treehugger if you’re interested.