I’d already reported on the carbon fiber wheels Koenigsegg is using (see this post), but I came across a cool twelve minute video showing the manufacturing process of these wheels.  Neat video, still a bit excessive, but if you see the value in a 280mph street car, wheels like these do make sense!

We all know that in 1906, a large earthquake, followed by a devastating fire, destroyed about 80% of San Francisco.  Fortunately for history, a few days before the quake, someone strapped a camera to the front of a cablecar and created a twelve minute video of Market Street, a video that included sound.  It’s really cool to look back in time like this on a very busy city, one that was to be changed forever in just a few days.  I find the cars especially fascinating…the way they weave and dart around the horse-drawn wagons and each other reminds me of how people drive in less developed countries these days.  Check out the video below. 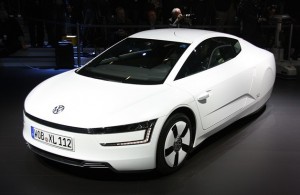 Volkswagen unveiled the production version of its XL1 two-seater car at the Geneva Motor Show recently.  It’s a diesel-electric plug in hybrid vehicle that gets about 261mpg and an electric-only range of around 30 miles!  While those numbers may end up slightly lower once the car goes through the US tests (the European test cycle turns in higher numbers typically), it’s still incredibly impressive.

Powered by a .9 liter two cylinder diesel engine, it’s not especially fast, even with the electric motor assist….0-62mph takes 12.7 seconds, for example.  There’s no official word on price, though since it’s a low volume, largely hand-built production car, you can expect the price to be pretty high, probably pushing six figures.  Definitely an ‘early adopter toy’, but also a good example of the future of automobiles.

Read more at AutoBlog and NPR. 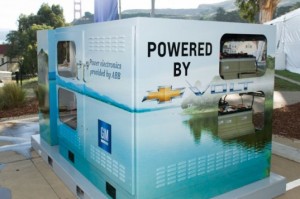 When people talk about how long the batteries in hybrid and electric vehicles last, keep in mind that the battery is still usable at the end of its ‘life’, it just has decreased capacity (around 80% of its original capacity seems to be a common number there).  It’d be a shame to recycle a battery with so much energy storage potential…which is why it’s nice to see things like this system from GM, designed to use the cast-aside batteries from their Volts (once they get to that age, that is…it’s still a very new car).  One of the systems shown here provides enough energy storage to power three to five average homes, so a more likely use would be in an off-grid system in a larger building, for example.  It’s an imperfect solution, but this is an emerging market and it’s nice to see that hybrid batteries have a good chance of finding life beyond the pavement. 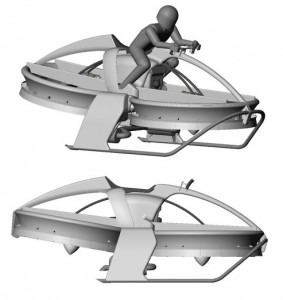 A real, functional hover bike!  While the image to the left is just a next generation concept image, the videos below show a functional prototype.  While it still seems a bit rough around the edges, this concept works and I can’t wait to see it evolve.  It uses ducted fans and a clever mechanical control system to enhance stability (when the rider leans, a force is applied to control bars located in the knee area).  Check out more over at Aerofex.