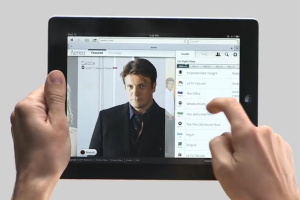 The TV industry is moving ever closer to either collapse or a reinvention of their business model.  They’ve been resisting change for years, but just like the music industry before them, technology is enabling inevitable change.  A federal appeals court just ruled in favor of Aereo, a service which lets people watch over-the-air TV when they want, where they want, delivered over the internet to iPads or any device.  TV networks fought this, naturally, but lost (they may yet appeal to the Supreme Court, but that’s their only option at this point).  Read here for more on that.

The other story of late is season three of Game of Thrones debuted to record numbers of viewers.  What’s significant though is that it also set a record for the largest BitTorrent swarm – people are downloading this in huge numbers, as HBO does not make it available to non-HBO subscribers for quite some time.  Remember how Napster helped lead to the upending of the music industry?  Something similar is happening with TV.  The cost to gain access to a single show is so high that people are choosing the only other option (other than wait months to a year for it to be available on DVD).  As iTunes showed when it debuted, people are willing to pay a reasonable amount for content, if delivered in a timely manner comparable to other options on the market.  The TV business model is more complex, but is proving to be incompatible with consumers’ current desires and technologies.

Combine this with Netflix and Amazon producing their own shows, and we’re seeing an imminent collapse of the TV industry as it has been known…and the birth of something much more consumer friendly.