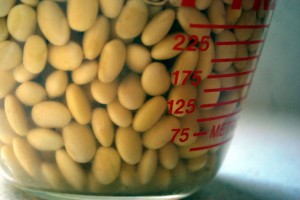 High levels of glyphosate (the weed-killing chemical in Roundup) have been found to be present in genetically engineered soy beans (all tested samples were grown in Iowa).  It’s not terribly surprising, for one of the main reasons crops like soy are genetically engineered in the first place is to be resistant to Roundup, so that they may be sprayed with that to control weeds.  The chemicals get on the food, the food ends up on your plate…simple as that.  It’s not something you can just wash off either, as glyphosate is absorbed by the plant, it’s inside your food.

The study (here’s a link to the source) found levels of Roundup to be 9mg per kilogram, which is double what Monsanto themselves deemed ‘extreme’ way back in 1999 (link).  The level deemed ‘safe’ by governments is 20mg/kg in the US…but the interesting thing is that it used to be 0.1mg/kg until it was raised in 1999.  Europe did the same, raising the ‘safe’ limit from 0.1 to 20mg/kg in 199.  Brazil raised their ‘safe’ level from 0.2mg/kg to 10mg/kg in 2004 (but only for soybeans!).  There is justifiably concern that the ‘safe’ levels were not raised based on scientific evidence, but rather for business reasons.

So why is this a big deal?  Well it’s not a chemical that has been scientifically shown to be safe…and quite the opposite, there are concerns that there may be a link between glysphosate and digestive issues, obesity, autism, Alzheimer’s, depression, Parkinson’s disease, liver disease, and cancer.  Note that none of that is proven, just that there does appear to be some biological disruption caused by glyphosate, and that sort of biological disruption may explain the above.  There’s a bunch of health-related information at this link or this one.

This trend of shipping untested product like this and making us all human guinea pigs is really disturbing.  The reality is that if there IS any link here ever proven, it will be impossible to hold anyone accountable.  Hence no incentive for people to do real, scientific testing beforehand.

It probably goes without saying, but…I recommend buying organic food whenever you can!

You can read more about this here.