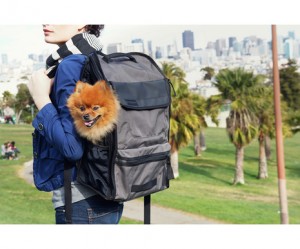 Timbuk2, perhaps better known for their awesome laptop bags,(I’ve used them for years and love them, very well made), has actually started selling a backpack for dogs.  No, not one for your dog to wear…but a backpack to allow YOU to carry your dog!  As a dog lover, this sounds completely ridiculous to me, but perhaps if I lived in a bit city I’d find the need to carry my dog rather than let him walk around?  I don’t know.  Although, my dog is rather large for that (he’s a beagle).  If you feel this is something that you really, really need in your life, you can find it for $90 at Timbuk2’s product page here.  Please reconsider though…dogs LOVE going for walks, smelling and peeing on everything, and trying to trip you with their leashes.  Don’t deprive them of that!

Yes…I did consider that maybe this was some kind of a joke…but I learned about this via an email from them…and it’s nowhere near April 1st…so I think this might actually be a real product! 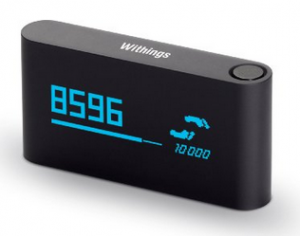 The Withings Pulse activity tracker is one of many similar products in an emerging market of lifestyle technologies, and one that I’ve been using for many months now.  The Pulse can track how many steps you take, and how much sleep you get, but what I feel sets it apart from other products is its built in heart rate sensor located on the back.  More on that later.

The Pulse is very well designed.  Its compact size is covered in soft-touch paint, and the easy to read display blends in with the enclosure to result in no visible bezel.  Charging is via the included USB cable, and I find the Pulse needs to be charged so infrequently I really don’t know how long a charge lasts (Withings claims a two week battery life, which I see no reason to doubt).  I love the compact size that fits easily into my jeans pockets, though I’m less happy about the included wristband that you use at night.  It closes with velcro and there are times at night when I wake up and notice it’s loose or coming detached, requiring a bit of fumbling in the dark to resecure it.  I find it’s best to start out with a pretty snug closure of that wrist strap, it’s less likely to work loose that way.  The Pulse syncs automatically with my iPhone, and while it occasionally prompts me to restart the iPhone app, I find the overall sync experience to be seamless and effortless.  The display acts as a simple touch screen, with the sole physical button being used to cycle between display modes.  For example, to activate sleep mode, you cycle to the appropriate screen, then swipe to activate.  It’s all very easy to use and intuitive.

Step tracking is one of the big reasons people buy this, trying to hit a 10,000 daily step goal which is loosely based on the Surgeon General’s recommendation of 30 minutes of activity per day.  It seems to work well at this, though I find the mileage calculation to be inaccurate and overly optimistic.  When you use the free iPhone app, you can view your step activity on a daily or weekly basis.  The weekly view just shows number of steps, while the daily view color-codes the activity to represent the level of exertion – in the screenshots below, red was a nine mile jog I enjoyed yesterday (yes, enjoyed!). 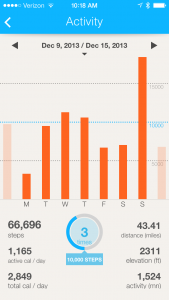 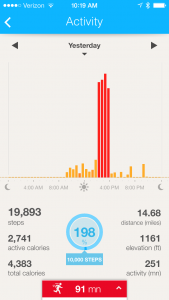 Sleep tracking is the other cool feature of the Pulse.  The other activity trackers I’ve seen will tell you the amount of time you spend in bed, but to me that’s not nearly as useful as the quality of sleep you get during that time.  The Pulse tracks light and deep sleep, which I assume it’s using the heart rate sensor to help detect (the wrist band has a window to provide a clear sight between the heart rate sensor and your skin).  It also detects time spent awake, though I find that’s not very precise.  As with activity tracking, sleep tracking data is displayed as either weekly summary, or daily view, as you can see in the screenshots below.  What I find really interesting is how sometimes the amount of deep sleep I get is not very dependent on how much time I spent in bed. 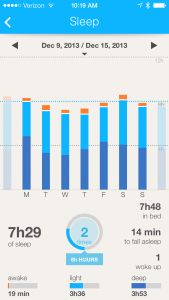 The sleep tracking is really cool to review, especially when you start looking for correlations between how much deep sleep you get, and how you feel the next day.  It’s probably my favorite feature of the Pulse, and what really sets it apart from the other fitness trackers I’ve seen.

The iPhone app will also show data for heart rate measurements, though that isn’t of as much interest to me.  But hey, if that’s your cup of tea, this product also works great for that!  You place your finger on the rear of the Pulse and select the heart rate option on the screen to perform a quick measurement.

The Pulse can be purchased for $100 from Amazon and is well worth the money, provided you pair it with the iPhone or Android App to get the most out of the data.  I have concerns about the longevity of that velcro wrist strap (I worry the velcro will not hold as tightly over time), but this is such a fast-evolving technology that I expect I’ll be replacing my Pulse with a next generation product before that becomes a real issue. 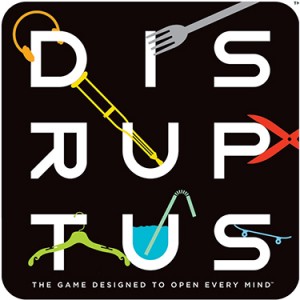 Disruptus is a fun game that, at its most basic level, is really about brainstorming.  As an engineer, I’ve already realized the benefit of brainstorming new ideas with other people, but this game helps bring that form of creativity to people who maybe don’t deal with this on a daily basis.  While there are ways of keeping score when playing Disruptus, I feel the value is more about the fun and excitement that comes with thinking of new ideas, new ways of doing things.  If keeping score will get people involved, great, but I just enjoy playing the game more than ‘winning’.

The game ships with a set of cards, each with a picture of an object on them (or draw your own object or idea on one of the included blank cards).  The typical way of playing this game will involve using one or two of those cards at a time for one of the following tasks:

When keeping score, a judge will determine whose idea wins.  As the instructions say, ‘ultimately the craziest, most innovative idea should win.’  So maybe the examples I listed above aren’t going to lead me to victory, but you get the idea!

The rules seemed, to me, pretty loose and disorganized, at least compared to other games I’ve played, and I wasn’t sure how it would go.  I was really surprised to find that the other adults I played it with quickly got wrapped up in the game and were having fun….it wasn’t so much about ‘winning’ or keeping score, but more just for the fun of it.  Deviating from the written instructions is, I think, one of the key aspects of this game and is even encouraged by the creators.  At its core though, it remains a great way of getting into that brainstorming frame of mind – whether you choose to be competitive and use the timer and scoring, or just want to have fun.  Check out the video below for more details on gameplay.

I found it really easy to adapt the game to younger kids (my six year old daughter and her cousin).  While camping as a group, we played this game around the campfire, with a variation of the Create2 play.  Rather than taking pieces from each image or idea to make something new, the kids really liked just taking the whole idea or objects and combining them.  For example, let’s say you draw cards with a watch and a stapler.  The kids would say you could put a clock in a stapler so you always know what time it is at your desk.  It’s pretty basic, but I think it’s a good way to get them to start visualizing new ideas and inventions, and a good stepping stone to thinking of ideas that just take *parts* of those objects to make something different.  Us adults around the campfire all busted up laughing though when I drew cards with a stoplight…and a bed!  A bed with a stoplight built in?  I could see that being a successful Kickstarter project…

If your kids watch Phineas and Ferb, they’ll quickly latch onto this game as it’s very similar to the fantastic inventions Phineas and Ferb create in their backyard (not to mention Doofenshmirtz‘s -inators).   As a quick side note – Phineas and Ferb is a great show for kids and adults and is of similar mindset as this game – be creative, think outside the box, know no boundaries, and have fun.  I highly recommend that show, and you can find it on iTunes or Amazon.

Disruptus could also be a fun team building activity at work, especially if your employees don’t already engage in team brainstorming as part of their normal routine (from my experience, few companies truly do this).

Apple is launching its ‘12 days of gifts‘ app, with giveaways starting 12/26.  Each day will feature some new app, book, music, movie, or who knows what, downloadable for free for 24 hours only.   This is the first time they’ve done this in the US, so I have no idea what level of quality we’ll see, but I’ve been impressed by the free Christmas music they’ve given away in the past, and considering there are going to be approximately one gazillion new iPad activations on 12/25, my hunch is Apple is going to through some quality stuff out there for free to get people hooked on the App store.  It’s definitely worth checking out, you can’t beat the price! 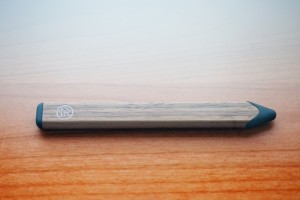 I’m already a big fan of Paper, the note/sketch app from FiftyThree.  Now they’ve introduced their own ideal stylus to go with their app, and at first glance I’m impressed.  It’s double ended…flip it over to erase, for example…and that feature is what caught my eye the most.  Construction is either aluminum or walnut, a nice touch.  It’s not a passive stylus like most…there are switches embedded inside to assist with this functionality.  I really want to test it out for myself so I’ve ordered one.  Once it arrives (2-3 weeks, per their website), I’ll post a full review here with a comparison to your typical passive or ‘dumb’ stylus.  I’ll also be posting reviews of some other products I’ve been using the past few months (or more) that I think would make good Christmas gifts for the geek on your list.  Or for yourself!

Read more at Wired, or preorder from FiftyThree ($50 for aluminum, $60 for wood).