A friend recently made me aware of a website for a group called Project Drawdown. It’s interesting…it’s addressing the concerns of those who want to do something to fight global warming but maybe aren’t sure where to start. On a larger scale though, it’s identifying all the things we can be doing to reach that drawdown point…where greenhouse gas emissions start decreasing for a change.

Politicians would be wise to draw from this knowledge base to draft their own proposals for fighting climate change, if they wish to attract the interest of voters who care about this issue. The breadth of ideas here is inspiring.

Ah, leave it to the French to make a TV advert about passive house design that’s mildly NSFW but also humorous and entertaining.  It talks about all sorts of energy efficiency strategies, and, well, some other stuff.  Check it out below. 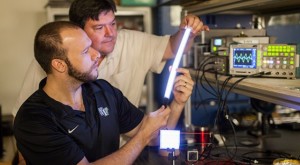 Scientists at Wake Forest University have developed what appears to be the ultimate light bulb.  Made from plastic, it’s shatterproof, as efficient as LED bulbs, are completely quiet (no humming like some CFL), no hazardous chemicals, and they produce a light of comparable color to natural sunlight.  They accomplish this by running electricity through a conductive ploymer that’s been doped with carbon nanotubes.  They’re expected to be cheap to make, and if all goes well, will hit store shelves sometime in 2013.

More on this over at Extremetech.

By retrofitting the Empire State Building to improve energy efficiency, they were able to save a whopping $2.4 million dollars in energy costs over a year!  This is equivalent to around 4,000 metric tons of carbon, which is about what you’d get from planting a 750 acre pine forest.  This shows not only what can be saved by energy efficiency, but also how much energy is being wasted by many (most?) buildings on this planet.  You can read more about this in the press release.

Vu1 has developed a new, energy-efficient lightbulb that’s a bit different….not like the LED and CFL bulbs you see on the shelves today.  They’re using a technology known as Electron Stimulated Luminescence, or ESL for short.  ESL bulbs emit electrons which hit a phosphor coating inside the bulb, which then emits light.  Pretty simple in theory, and the result uses around 60% less energy than an incandescent bulb (and contains no mercury, unlike CFLs), at a reasonable price (approaching $10 once production ramps up).  Compared to LED bulbs, it uses more energy and doesn’t last as long, but LED bulbs have had challenges getting good color reproduction, and the ESL bulbs might have an edge there.  You can read more about it over at Vu1’s homepage, or check your local Lowes if you want to buy one to try out.