It was inevitable that eventually, someone’s self-driving car would be in an accident involving a pedestrian…and a 49 year old woman in Tempe, AZ, pushing her bike across the street, was the first victim. While the car was one of Uber’s, it really could have happened to any of the tech companies. Details are still scarce as the investigation continues, but it’s safe to say that the car stored massive amounts of data that will make for a quick conclusion.

Startup Kitty Hawk unveiled their autonomous flying taxi, called Cora.  Designed to be a self-piloted, electric-powered, passenger-carrying drone service, the business model is hardly new, but their approach to the technology is. They’re combining a traditional aircraft with pusher prop and wings, with a multi-rotor (12, to be precise) drone-like configuration for vertical thrust, allowing true vertical takeoffs and landings.  No word on when you’ll be able to get a ride in one, but considering they have a flying prototype and financial backing from Larry Page, it’s a matter of getting the software right, and finding a way to certify this for use in the various countries (they’re starting out in New Zealand for precisely that reason, the country is more business-friendly for technologies like this).

As a quick side note…if you check out their website, note they did something clever with the scrolling..you scroll UP, not down like every other page on the internet.  Nice tie-in with their technology and slogan (“things are looking up”). 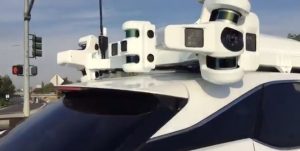 Lately I’ve been pretty optimistic about self-driving cars…the technology seems to be maturing so quickly, I’ve been expecting them to become commonplace in a matter of years, not decades.  A recent photo from Apple has me questioning that – and it’s not a problem unique to Apple, all self-driving automotive technology currently has this limitation.

Take a look at that picture, what do you see?  An incredibly complex array of optical-based sensors.  Some are lasers, some are cameras.  All self-driving cars use something similar, at least based on what’s publicly known right now (GPS is also used, but it just provides approximate location, with no insight into obstacles on the road).

So.  Optical sensors.  What happens when the lenses get dirty?  I used to live in CA so sure, out there they can stay clean for months.  Or, as Apple recently announced, the technology can be improved to deal with some raindrops on the lens.  But drivers in most of the country have an honest four seasons to deal with, and of course the worst is areas with snow.  Not just for the snow that can accumulate on the lenses, but when that snow melts, the dirty airborne mist kicked up by other cars coats your own in a deep layer of muck.

The automotive industry has developed washers for headlights to partially address this problem, but those are imperfect…but maybe good enough for this application?  Ideally, I think a true wiper-based solution is needed for each lens.

How will this be solved?  I really don’t know…maybe improving the technology used to clean some car headlights.  Until then, I do expect self-driving cars to become commonplace, but only in mild-climate urban areas.

Rental cars can be fun!  Some say a rental car is the ultimate off road vehicle.  For me though, it’s a great chance to examine different product design philosophies, in some of the most expensive consumer products on the market.  On this trip, my rental car was a bright blue Toyota Yaris…a class of rental car I usually avoid but have been curious about.

So, the good: drop this car into a low auto gear (3 or 2), and it’s a peppy, fun car that reminds me a lot of a Mini Cooper.  Driving dynamics are downright decent.

The bad: everything else.  No, really,  the stereo is one of the most counter-intuitive I’ve seen.  A peice of plastic trim came flying off when I removed my laptop bag from behind the driver’s seat.  The brakes work eventually.  The driving position is reminiscent of bad Italian design from decades ago, with arms extended and legs crunched up around either side of the wheel.  The worst design detail though?  The door locks,  I haven’t had a car without remote locks in ages, but that’s not a big deal.  What’s bad is how the locks work.  Unlock the doors by rotating the key clockwise.  Ok. Got it.  Now unlock the rear hatch…by rotating the key *counter* clockwise.  What kind of moron decided they’d actually ship a mass produced vehicle like this?  Redesign the locks so they work the same, it’s just idiotic to do otherwise.